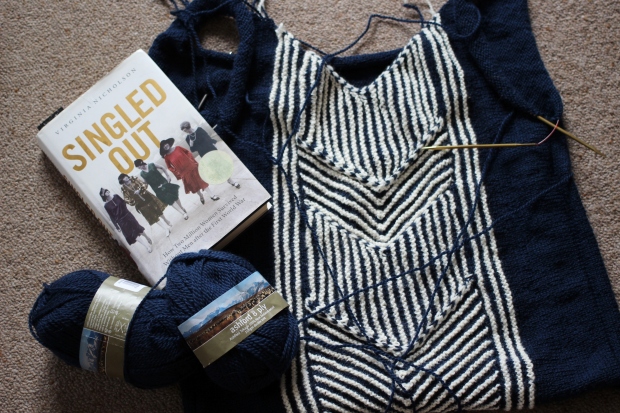 I’m reading…Singled Out: How Two Million Women Survived Without Men after the First World War by Virginia Nicholson

After reading the introduction of Singled Out, I wasn’t so sure I wanted to continue. It makes two large assumptions (that every woman is heterosexual and every woman wants to have children) and there was a wiff of large assumptions based on little evidence. Then I realised I put off reading too many things that I think might be ‘bad history’ (almost like I think it will be contagious) and I should read it, if only to learn what I don’t want to do in my own practice.

So far, I’m being rewarded for this perseverance; the author relies on the diaries and other written words of the women being studied and it is so, so refreshing to hear about the First World War from a female point of view.

While I was writing my book, I let myself cast on whatever made me happy and didn’t bother with finishing anything. As a result I now have a lot of WIPs on the go. I’m not allowed to cast on anything new until I’ve finished at least some of them.

I figured an easy win was the Leiden jumper because I’m past halfway and it’s a eight-ply jumper (I’m knitting it up in Ashford Tekapo 8 ply).

It’s a very interesting construction, with the panel at the front worked first and then the sides and arms knit sideways. I think I’m going to extend the arms and make it into a sweater.

See what everyone else is knitting and reading over on the Yarnalong.

Perhaps the aspect of Onward Knits I worried about the most was the photo shoot. There were a lot of decision that had to be made and only one thing was certain: I had to do the photos at the railway station. END_OF_DOCUMENT_TOKEN_TO_BE_REPLACED

I am very excited to announce the release of my first book: Onward Knits: Knitting patterns inspired by the Wellington Railway Station.

END_OF_DOCUMENT_TOKEN_TO_BE_REPLACED

For the last three weeks, I’ve been proofreading my Dad’s 80,000-word book on World War One (as well as my normal day job). As you can imagine, it doesn’t leave a lot of brain power for much else! But now, thankfully, it’s back with him and I have a respite until it’s time to typeset.

How am I rewarding myself? END_OF_DOCUMENT_TOKEN_TO_BE_REPLACED

What’s better than a quick and easy, super comfy vanilla sock? One in delectable hand-dyed gradients!

END_OF_DOCUMENT_TOKEN_TO_BE_REPLACED

You know when you really want something to be finished, so you rush it and make mistakes and it ends up taking even longer? That’s the story of my second Hermione Every Sock. I had to redo the heel-flap because I hadn’t divided the stitches evenly across the two needles – but not before I’d redone the heel decreases three times because I couldn’t work out what was wrong. Then I had to redo the gusset. And the toe graft and several rows there.

All because I just wanted to be finished, so I could move onto the next pair of my August Sockathon. Maybe I shouldn’t do challenge knitting. END_OF_DOCUMENT_TOKEN_TO_BE_REPLACED

I’m currently reading The Girl with the Dragon Tattoo by Steig Larsson.  It’s a crime thriller in which the main characters conduct lots of archival research, so it’s pretty much my life (you know, without the dead people).  END_OF_DOCUMENT_TOKEN_TO_BE_REPLACED

Recently I’ve had to discard a couple of pairs of hand-knitted socks. A possum-merino blend pair has managed to both felt and develop holes (go figure) and the very first pair I made have worn thin all over (it was cheap Spotlight yarn, it’s done pretty well).

The loss of two pairs, combined with finally purchasing jeans, has revealed a significant shortage of socks. So I’ve challenged myself to an August Sockathon! How many pairs of socks can I knit in a month? It’s probably only a couple, but I’ve lined up five possibilities from my current stash (which is remarkably light on sock yarn). END_OF_DOCUMENT_TOKEN_TO_BE_REPLACED

I am currently casting off one of the patterns from the book I’m writing and it’s all very exciting/absolutely terrifying. END_OF_DOCUMENT_TOKEN_TO_BE_REPLACED

I’ve always considered myself rather lucky to share hobbies with both of my parents. It’s nice to have something to talk to your parents about that’s not, well, just you and them.

In the case of my Mum, it’s knitting (and sewing and gardening, but that’s for another time). It’s only in the past couple of years, though, that we’ve started to do knitalongs (KAL). Our most recent KAL: Bracken Beanie! END_OF_DOCUMENT_TOKEN_TO_BE_REPLACED